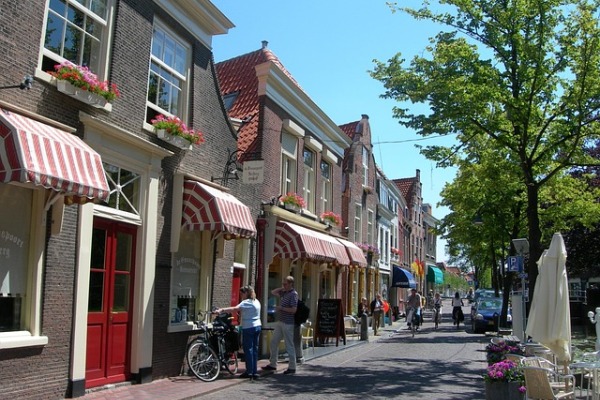 Located in the province of South Holland, Delft is a city of around 100.000 inhabitants famed for it’s beautiful and historic city centre.

Delft received it’s charter in 1246 but has played a major role in the power enjoyed by the royal family, the House of Orange. During the Eighty Years’ War, in which the Dutch fought against their Spanish occupiers, the leader of the Dutch revolt, William of Orange (or William the Silent), made Delft the base for his operations.

Following the end of the war, Delft became, for a time, the capital of the newly liberated Netherlands. William of Orange is now buried in the city’s Nieuwe Kerk.

During the Golden Age Delft was one of the most prosperous cities in the Netherlands thanks to its involvement with the Dutch East India Company. The company traded regularly with the Far East and, as a result, Chinese porcelain was introduced into the country. This style of pottery has now become synonymous with city, and Delft Blue pottery, or Delftware, is famous the world over.

One of the most famous Dutch masters, Johannes Vermeer, was also a native of Delft. Painting during the Golden Age, Vermeer had a modest career but is now considered to be one of the greatest artists of his time. Although some of his most famed works are now housed in The Hague or Amsterdam, a Vermeer Centre was opened in 2008.

Delft is also home to the Delft University of Technology, an institution often regarded as one of the best in the country. It is also the largest public technical university in the Netherlands.

Because of the university being based on a campus, the city retains its quaint and gezellig feel. There are numerous bars and cafes located around the city centre, and the Markt, the largest market square in the Netherlands is the perfect spot to sit yourself on a terrace in the sunshine.